The Lord will fight for you. 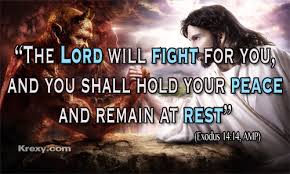 And Nadab and Abihu, the sons of Aaron, took either of them his censer and put fire therein and put incense thereon and offered strange fire before the Lord which He commanded them not. And there went out fire from the Lord and devoured them and they died before the Lord. Then Moses said unto Aaron, this is it that the Lord spake saying, I will be sanctified in them that come nigh me and before all the people I will be glorified. And Aaron held his peace – Leviticus 10 : 1 – 3

Aaron and his children were called by God and that does not make them to be above God’s commandment. No body is perfect except God Himself. During their service to God, a mistake was made and it resulted to their death.

Aaron was their earthly father and he did not throw in the towel and said it is over between him and God but rather the bible says, ”he held his peace”.

Let’s think about the pains of loosing two children on the same day during their service to God? Yes, many people has passed through trials in life at times more difficult than that of Aaron and others not as difficult as that. The question is, that will not be your portion in the name of Jesus Christ. If you are faced with such trials, can you continue to serve and love God?

Many will give up on God and say that, how can he or she be serving God and He will kill his two children? Brethren, all is about God. He is love, He is peace, He is patient. He is the all in all that we have. It doesn’t matter our trials, let us always hold the peace that He has given to us.

Even Aaron and Moses could not enter the promise land because of mistake. Does it mean that God hated them? NO. God loves them. We are all children of the Most High God and His love for us is constant. He that has called us is faithful.

We should try to always obey His commandments. It is hard, yes, but we will find it easier to do if we accept to die to sin, His grace will be surfficient for us to fulfill it.

Posted by thehouseofprayers on Aug 3, 2016 in Acceptance, Fear not, Focus, Patient, Peace