This year, my family and I refuse to be disconnected from our divine source of power and blessings in the name of Jesus Christ.

Holy Spirit, anoint my heart and that of my family to receive divine wisdom and understanding to excel in 2022 in the name of Jesus Christ.

O Lord, give me and my family the grace to worship You the way and level our worship will be acceptable to You not the way we want to worship You in the name of Jesus Christ.

Any uprising and satanic gang up against me and my family in any area of our lives in this month of October and beyond receive the judgement of fire and scatter in the name of Jesus Christ.

Month of October, hear the word of the Lord, release every blessing that belong to me and my family without delay in the name of Jesus Christ.
Happy new month.

Any evil cloud programmed to cover my glory and the glory of my family in this month of September, scatter without remedy in the name of Jesus Christ.

Esther went in to meet with the king without a crown but she came out with a crown on her head.
O Lord, let our blessings become too hot to be delayed in the name of Jesus Christ.

For this night prayers, we will be studying the book of Esther.
God is too faithful to fail. When your time comes, it doesn’t matter who has been there before you, God knows how to place you on that seat because it is not by process but by grace.
The bible says, During the third year of his rule, Xerxes gave a big dinner for all his officials and officers. The governors and leaders of the provinces were also invited, and even the commanders of the Persian and Median armies came. For 180 days he showed off his wealth and spent a lot of money to impress his guests with the greatness of his kingdom.
Esther 1:3-4
A dinner that lasted for 180 days to show off his wealth.
At the end of this time, King Xerxes gave another dinner and invited everyone in the city of Susa, no matter who they were. The eating and drinking lasted seven days in the beautiful palace gardens.
Esther 1:5
While the men were enjoying themselves, Queen Vashti gave the women a big dinner inside the royal palace.
Esther 1:9
On the seventh day as the king was filled with joy, he sent a message to his wife who was also celebrating with her friends to come so that he can show the beauty of his wife to the people. The king wanted her to wear her crown and let his people and his officials see how beautiful she was.
Esther 1:11b
Under normal circumstances almost every woman will like such. In everything we do, we should always know that the spiritual controls the physical whether we like it or not it has been like that and it will always be like that.
The king has to seek the advice of his officials and what response could the king receive? More fire.
Your Majesty, if you agree, you should write for the Medes and Persians a law that can never be changed. This law would keep Queen Vashti from ever seeing you again. Then you could let someone who respects you be queen in her place.
Esther 1:19.
The king was happy and a law was written. Despite the law the king still have the feelings for his wife but because an atmosphere has been created, the King’s personal adviser spoke to him that Vashti’s time was over. The crown cannot fit Vashti’s head anymore.
Esther and other virgins were selected and they need to be cleansed for twelve months. Other virgins went to see the king before Esther and they demanded for things to take along.
When it was Esther’s turn to go and see the king the bible says that Esther demanded for nothing except what was freely given to everybody.
Let’s consider the following points:

The Lord will take me up 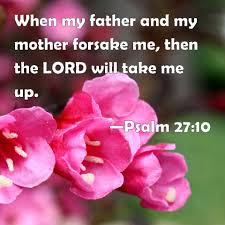 What my physical parents are unable to give to me, God is ready to give it to me not because of my qualification, certificate, influence but He made me qualified through the blood of Jesus Christ. I have to keep running my race with the grace of God and I will not try to convince people that I am very good. That is where most of us miss it. We try to convince people that we are too perfect. Jesus said, no man is perfect except God. God is not looking at our perfection but rather He is looking us through His grace. We have to respect our parents and accept whatever they are capable of giving us but our hope and trust should be on God because He is the only one that help to fulfil our destiny.

Prayer: O Lord, Help me to recognise You as the source of my life and the source of everything I have no matter what my physical parents are able to give me in the name of Jesus Christ.