For every time I doubt how far I can go

Posted by osarobohenry on Apr 3, 2016 in Blessing, Doubt, Favor, Love

I don’t understand why people cheat

Posted by thehouseofprayers on Feb 9, 2015 in Doubt 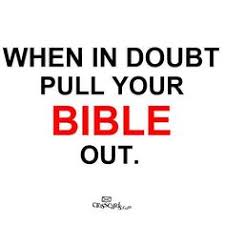 Another thing that can be an obstacle to our prayers is DOUBT. Most times even when God speaks to us, we should try all we could to believe and trust Him no matter the circumstances surrounding us. He is always faithful to His promises. When doubt set in, we should confront it with the word of God which the bible.

Right since the time of creation, satan has always been trying to bring doubt to mankind about what God Himself has told us. After God created man and woman and placed them in the garden of Eden the serpent (Satan) went to the woman and told her,

Now the serpent was more cunning than any beats of the field which the Lord God had made. And he said to the woman, Has God indeed said, you shall not eat of every tree of the garden?” And the woman said to the serpent, we may eat the fruit of the trees of the garden but of the fruit of the tree which is in the midst of the garden, God has said, You shall not eat it, nor shall you touch it, lest you die. Then the serpent said to the woman, you will not surely die. For God knows that in the day you eat of it your eyes will be opened and you will be like God, knowing good and evil.

So when the woman saw that the tree was good for food, that it was pleasant to the eyes and a tree desirable to make one wise, she took of its fruits and ate. She also gave to her husband with her and he ate. Then the eyes of both of them were opened and they knew that they were naked and they sewed fig leaves together and made themselves coverings – Genesis 3 : 1 – 7.

The serpent tried all it could to place doubt in the mind of the woman and it succeeded in fulfilling the plan it came with. After the woman has listened to the sweet talk of the satan, she could not reject it because the serpent was very cunning. Anytime, the enemy, (satan) who also a thief come to us, we should not give him the chance to convince us because he is prepared and has a plan which is to steal, rub and destroy – John 10 : 10.

Then God said to Abraham, as for Sarai your wife, you shall not call her name Sarai, but Sarah shall be her name. And I will bless her and also give you a son by her, then I will bless her and she shall be a mother of nations, kings of peoples shall come from her. Then Abraham fell on his face and laughed and said in his heart, shall a child be born to a man who is one hundred years old? And shall Sarah, who is ninety years old, bear a child? And Abraham said to God, Oh that Ishmael might live before You. 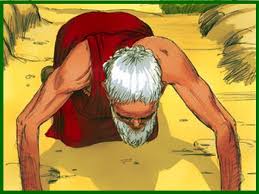 Then God said, No, Sarah your wife shall bear you a son and you shall call his name Isaac. I will establish My covenant with him for an everlasting covenant and with his descendants after him. And as for Ishmael, I have heard you. Behold, I have blessed him and will make him fruitful and will multiply him exceedingly. He shall beget twelve princes and I will make him a great nation – Genesis 17 : 15 – 20.

Here, God promised a son to Abraham even to the extent of giving the name they should call him and because his thought was based on how difficult it was for his body and that of his wife to bear a child because of their age, he laughed instead of considering how Great the power of God is. Abraham tried to manipulate God by mentioning Ishmael because he thought that God was reffering to Ishmael but God made it very clear that He was not reffering to Ishmael and that Ishmael too has his own blessing which was different from that of the promised son, Isaac.

No matter the circumstances that we are into, we should always know that God is greater than that situation so we have to believe on His promises instead of doubting them.

And He said, I will certainly return to you according to the time of life and behold, Sarah your wife shall have a son. Sarah was listening in the tent door which was behind him. Now Abraham and Sarah were old, well advanced in age and Sarah had passed the age of childbearing. Therefore Sarah laughed within herself, saying, after I have grown old, shall I have pleasure, my lord being old also?

And the Lord said to Abraham, why did Sarah laugh, saying, shall I surely bear a child, since I am old? Is anything too hard for the Lord? At the appointed time I will return to you, according to the time of life and Sarah shall have a son      – Genesis 18 : 10 – 14.

Now it was the turn of Sarah to laugh which is a common thing to do by any normal human in such a situation but we should try to always remember that who has created us in His Own image knows exactly what He has place in us and any promise He made with us will always come to pass.

Most times, we go to hospital and the doctor will tell us the result of any test that was carried out in our body and we will continue to shake and be afraid instead of us to reject any negative report we are indirectly accepting them. The doctors are very free to say anything that the machine told them but we should remember that our God is greater than those machines. If He has given any promise, hold on to it because He can move whatever is needed to be moved for Him to fulfill His promises if we are ready to depend solely on Him.

When my wife was pregnant for our third child, right from the very first time we went for check up, the doctor said that she is going to deliver the baby through operation. Brethren, the doctor is very, very free to say whatever the machine told him but let me remind you that we have a God who is far Greater than the doctor and the machine. I presented the issue before the God who created my wife, the doctor and he who manufactured the machine and at the end, the God of creation who never stop answering those that call upon Him answered and the delivering was more easier that the first two she had.

In the new testament, after Jesus Christ was baptized by John the Baptist, he still doubted if He was the Christ.

The next day John saw Jesus coming toward him and said, behold, The Lamb of God who takes away the sin of the world. This is He of whom I said, after me comes a Man who is preferred before me, for He was before me. I did not know Him, but that He should be revealed to Israel, therefore I came baptizing with water.

And John bore witness, saying, I saw the Spirit descending from heaven like a dove and He remained upon Him. I did not know Him, but He who sent me to baptize with water said to me, upon whom you see the Spirit descending and remaining on Him, this is He who baptizes with the Holy Spirit – John 1 : 29 – 33.

John saw what happened when he baptized Jesus Christ and after he was arrested, he sent messengers to Jesus to ask Him, ”Are You the Coming One or do we look for another? – Matthew 11 : 3′‘. John the baptist himself was told on how he will know Jesus Christ but still after seeing the sign and all he needed for confirmation, he was still in doubt. We should not allow the seed of doubt to grow in us no matter how small it might seems to be. We can overcome it if we want because the word of God is there to guide us. 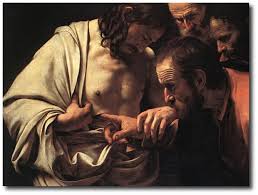 The bible said after eight days, the disciples were together again inside with Thomas and the door was shut Jesus stood in their midst, ”Then He said to Thomas, reach your finger here and look at My hands and reach your hand here and put it into My side. Do not be unbelieving but believing. And Thomas answered and said to Him, my Lord and my God. Jesus said to him, Thomas because you have seen Me, you have believed. Blessed are those who have not seen and yet have believed” – John 20 : 27 – 29.

PRAYER : Everlasting Father, I thank You for Your faithfulness and for Your promises. Help me Lord to overcome doubt in all Your promises no matter the trials I might be passing through in the name of Jesus Christ.

Posted by thehouseofprayers on Jan 23, 2015 in Doubt