Every agenda of my enemies and those of my family concerning the affairs of our lives this year be completely destroyed in the name of Jesus Christ.

Thank You Lord, for You have not given me and my family into the hands of the enemy but have set our feet in a spacious place in the name of Jesus Christ.

Every arrow circulating inside my body, hear the word of the Lord, come out now, go back to your senders in the name of Jesus Christ.

O Lord, set me and my family free of any spiritual bondage my family line, my place of birth and the current place we are living have been knowingly and unknowingly in the name of Jesus Christ.

Jesus Christ, the Great deliverer, deliver me and my family from every form of spiritual slavery we might be in, in any area of our lives knowingly or unknowingly in the name of Jesus Christ.

Good morning brethren and happy new week.
As the first half of 2021 is about to end and we will be entering into the second half of 2021, during this transition period, we are going to be addressing two different gates. One of the gates is midnight of 30th of June to 1st of July 2021 and the second gate is the same night of moving from the first half of 2021 into the second half of 2021.
The bible talked about many different types of gates and every season have its gate also and this gate must be addressed with all seriousness because the bible says in 3 John 1:3 – Beloved, I wish above all things that thou mayest prosper and be in health, even as thy soul prospereth.
Also in lamentations chapter 3 the bible says, 22 – It is of the Lord’s mercies that we are not consumed, because his compassions fail not. 23 – They are new every morning great is thy faithfulness.
God’s purpose for us is not to remain in one level in every area of our lives.
As we move towards this gates we will be embarking on fasting and prayer from 29th of June to 2nd of July 2021. It will be nice if you can join us during this period because we will be praying three times a day and during the midnight hour as well. We don’t want to end the second half of 2021 the same way we the first half is going to end no matter how God have blessed you, He is ready to do more. God bless you as you join us in the name of Jesus Christ.

The fasting will be as follows:

Watch “Above All [with lyrics] – Lenny LeBlanc” on YouTube

Posted by osarobohenry on Apr 4, 2021 in Change, Kindness, Love, Refuge, Something good, Trust

As for me, through the blood of thy covenant thou hast delivered me from the pit that has no water.

Take a moment to praise and worship the LORD.

This new year prepare yourself because God has great things He has prepared for you no matter what is happening in the world.

Daniel and his three friends prepared themselves before their nation went to war and when they were taken as captives, God opened the door of opportunity for them because they had created the base for themselves before their problem came and in the midst of their trials, their personal traits qualified them for the job. You see, in every blessing or position God is taking you to, God has a role to play and we also have our roles to play. If they had not prepared themselves how will they have excelled in the role given to them? You might say yes, God can qualify them even if they’re not qualified. Yes, that is true but know one thing in God’s provision: that God will give you what you are prepared for because His blessing will never be a mockery to His children and He is a God of justice.

What about Joseph? In the prison he was training himself by interpreting other people’s dream. He was in Potiphar’s house as a leader under training but this was unknown to him. When God saw that he had been fully trained and qualified, He opened the door of opportunity to him. The cup bearer did not forget him for no reason. It was because he was not yet qualified because there were things God still wanted him to learn in the prison and he never complained, but rather kept doing what he knew doing and God was taking note of his skills and qualification.

What about David? When he was going through training his dad sent him to his elder siblings and God opened the door of opportunity when he was fully qualified. Was fighting Goliath the reason why his father sent him to his siblings? No. What his father expected was to give things to his brothers and see their well being and come back to his father but God, who was aware of his qualification, had another plan. Can you imagine: a father sent his son on an errand and was expecting him to come back with a response but only for the father to hear that the whole city was singing, that his son, who was not trained as a soldier, was being celebrated as the killer of the enemy’s war champion. The bible says, Goliath had been boasting for 40 days and no one could challenge him. David only heard him once and his spirit could not be at rest for hearing such statement from Goliath because he has been prepared. If he wasn’t prepared, such opportunity wouldn’t have come to him.

Prepare yourself with prayer, fasting, studying, attending seminars, taking up challenges and not running away from them. I have a friend in my school, before the lockdown, one of our lecturers shared us in a group to do group work and I was selected as the group leader and I allocated each portion of the project to each and everyone of us. Few people did what was given to them and about four of us had to do the other people’s portion, including our own and one lady said: ‘Henry, since the rest of them don’t want to work I won’t do their work’ and I told her that she should try to do the maximum that she could and shouldn’t look at others because she is training herself for the future. Finally, she obliged. Since march 2020 when the lockdown started, we have not been able to go back to class and we have been taking our lectures online and submitting our assignments online. Several times that same woman thanked me for the advice I gave her about not looking at what others were doing but focused because it was a training and due to that experience she had, today she is able to do all her assingments on her own. I told her that it was God who I thanked for her life for taking the advise. There was a post I posted here on this blog long ago whose tittle is “God brings people into our lives for a purpose.” In this journey of life our lives cross those who God knows will be beneficial to us, in one way or another. Some might be to challenge you, some might be to encourage you, some might be to train and prepare you even within a short time of that relationship, some might be to advertise or announce you, some might be to carry you along. All we need is to be focused and humble ourselves so that the purpose will be fulfilled and God will be glorified.

The importance of baptism 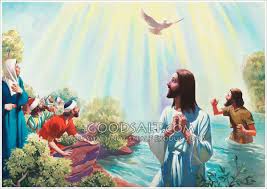 Then Jesus came from Galilee to the Jordan to be baptized by John. But John tried to deter Him, saying, I need to be baptized by You and do You come to me? Jesus replied, let it be so now, it is proper for us to do this to fulfill all righteousness. Then John consented. As soon as Jesus was baptized, he went up out of the water. At that moment heaven opened and he saw the Spirit of God descending like a dove and alighting on Him. And a voice from heaven said, ”This is My Son, whom I love, with Him I am well pleased’‘ – Matthew 3 : 13 – 17. (Message bible version).

After the baptism, nothing changed in His physical body but something has shifted in the spirit realm. The bible says that the Spirit of God  descended on Him like a dove and a voice followed. Immediately after the baptism, He was led into the wilderness and He was tested by satan after which He started preaching the way to enter into the kingdom of heaven because He has been empowered. He was not tested before the baptism but rather after. He could have been tested even before the baptism as a child of God but He went to baptized first so that we should know how vital baptism is in the life of a believer.

During His teaching, He explained what will be stumbling blocks or what will deprive us from inheriting the kingdom of heaven. He made us to know who owns the key of life in His hands and who has the authority over everything.

It is the samething when one receives anointing, physically no change is seen but something has changed in the spiritual realm. When Samuel went to go and anoint David in the presence of his brothers and father 1 Samuel 16 : 1 – 13. After anointing David, he has to go back to the shepherd’s field. The spiritual shift starts preparing him for the kingship. The anointing kept him alive no matter how hard Saul tried to kill him, after killing Goliath he didn’t succeed and later what God has said concerning him came to reality.

With the above we should take baptism to be very important. When we go for baptism, we might not see any physical change in our body or the garment we put on, but we should be confident that a shift has happened in the spirit realm. After accepting Jesus Christ into our lives the next stage of a believer is to go for baptism so that our old self will be laid to rest while our new self will rise as we go out of the water.

PRAYER: O Lord, thank You for the gift of baptism give us the grace to be patient so that we can be partakers of the blessings that go with baptism in the name of Jesus Christ.